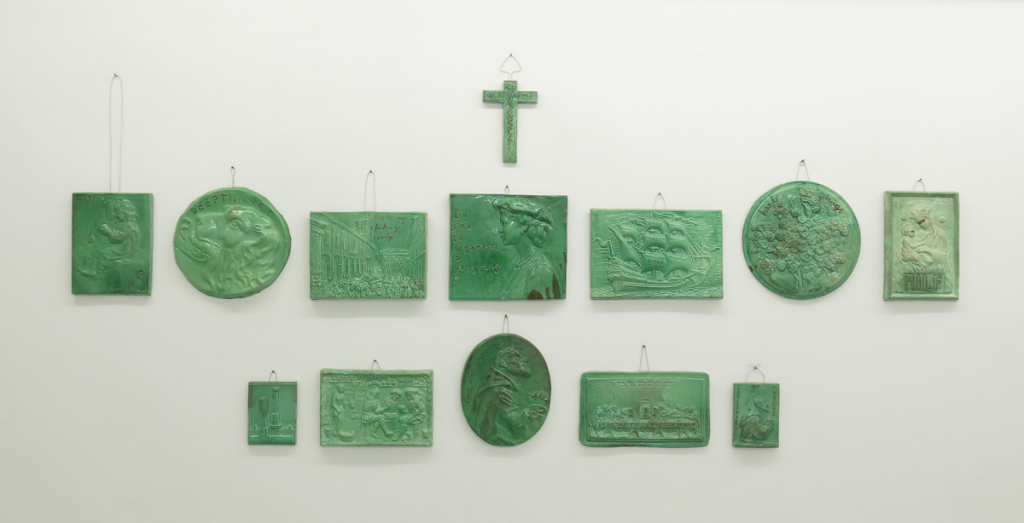 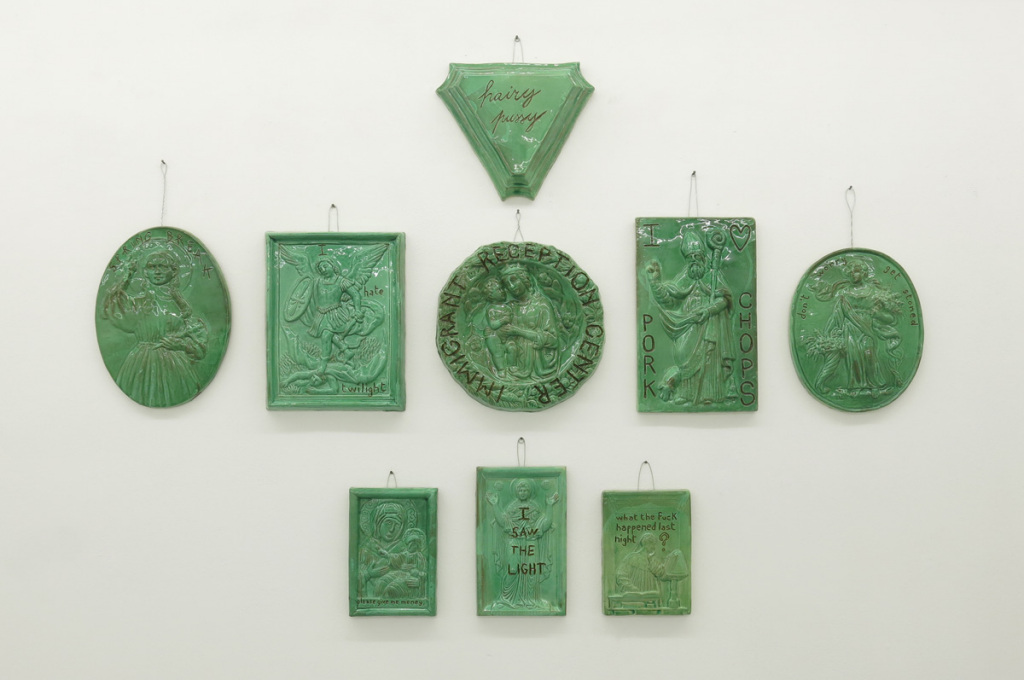 I saw that some of the old ivy had struck root anew,
and was growing green on low quiet mounds of ruin.
Charles Dickens, Great Expectations. 1861.

The ever-phantasmic aspect of these objects. They are ghosts made of glazed clay, sculptures, and reliefs – ghosts that were cooked at one thousand degrees. Celadon.

I called them ghosts because busts and reliefs existed before this artist: they belong to the first nineteen hundreds, to another era, to a century ago. And the figures- to centuries ago. Dante, Mary the Virgin, Michael the Archangel and the dragon are all subjected to a divertissement, to outrageous words, to an outrageous language. This is made of popular sentences and terms, slang, vulgar. Mutha Fucker. It is like walking into a supermarket, grabbing the forms and concepts that you need. With these, you step back into a degraded and consumed world where nobody understands them or needs them. What the fuck happened last night?

Barbaric acts. The ancient world, with its objects and its ideas, wouldn’t have survived without the use future generations made of it, distorting it, building new interpretational tensions and new languages. Tradition is and always will be a translation. (Of what has happened). The same oriental technique of Celadon is reconfigured, imitated, and reproduced. I saw the light. Doing the best that one can possibly do, the crystalized process of Celadon is appropriated through an artisanal work with a unique geniality; so, with inadequate and scarce tools (due to this inadequacy and scarceness), the artist’s enquiry surprises the viewer for its depth, its sweet and implacable cunning, because it feeds off of love for life and experience. On the one hand memory, history, the past (ours and of others); on the other the endemic loneliness of the present, a spatial and temporal condition characterized by a both terrible and splendid inability.

It apparently is a post-apocalyptic point of view, positioned, that is, after the catastrophe. I hate twilight. A perspective that intelligently manages the wreckage. It traces the way to tell and build a new beginning on the ruins, the scraps, and on the waste of the previous world. The eyes and the mouth become black holes on the classical face. On the classical face.

This art show is also a reflection on our artistic and figural inheritance. An anti-rhetoric show, on the rhetoric of art. Spring Break. Taking apart. Deconstructing. Reducing. Simplicity. Because Italian cultural identity has always been founded on moral littleness, on loss, on poverty, on nudity- which have been covered with layers of magnificence, of glory, of sumptuous decoration. The buildings, the texts, the artworks, even the pastries. At the base of it all there is elaboration –and removal- of the defeat. Don’t worry get stoned.

L’amarezza e la piccolezza, then, coincide. Building minute things, ingenious, resistant, beautiful and well made, severe and serious in their irony, things to care for, and through these build a dimension that seems on the point of wanting to fleet time –wanting to put oneself outside of it: harmony is this bitterness. Please give me money. Tragedy and comedy, minute and gigantic: “many competed, others where mocking one another while others saddened, some were laughing and others were crying, these people were advising while those were hoping, some making some strange face, others another one, some were using this language, others used another: it was like observing comedy and tragedy at the same time, and there were people playing music to glory, others to death. The end of it being, whoever wants to see how the world is made, should desire to have been present, when it happened.” (Giordano Bruno, The Candlebearer, 1582).